The constitution of prepreg tack in automated fiber placement (AFP) is affected by a sensitive balance between adhesive interfacial bond strength and cohesive strength of the prepreg resin. In an effort to explore the role of interfacial liquid-solid interaction on the tack of commercial aerospace-grade epoxy prepreg, a surface wetting analysis was performed on AFP-related substrates. The standard test liquid combination water/diiodmethane and extracted neat epoxy resin were used for contact angle measurement employing the sessile drop method and the Owens-Wendt-Rabel-Kaelble (OWRK) model. Additional rheological and topographical analyses were carried out to account for viscous resin flow on surfaces of different roughness. The results from the material characterization are discussed against the background of tack measurement by probe tack testing utilizing a rheometer. Significant differences between the investigated surfaces in terms of both the maximum tack level and the onset temperatures of adhesion were found as a function of test parameters relevant for contact formation. General agreement with the experimental tack results was observed employing a topographically extended version of the Dahlquist criterion. For each substrate, a temperature-dependent critical storage modulus could be determined that conforms to the onset temperature of tackiness. Contact angle measurements revealed a correlation between the thermodynamic work of adhesion and maximum tack and, moreover, the tack onset in the adhesive regime when additionally incorporating surface topography. Matching ratios of polar and dispersive surface free energy and surface tension components were found to favor the molecular interaction at the interface between prepreg resin and substrate. 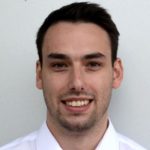